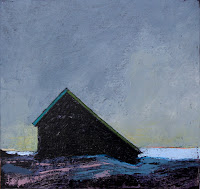 We often say that the value and merit of a work of art is subjective. That there is no real way to objectively discern a good painting from a not so good painting, that it is just a matter of opinion and unfortunately there are plenty of people willing to freely give theirs. Objective truth is a truth that exists independent of thought or an observer. This is the sort of truth that Cezanne was speaking of when he told Emile Bernard that the next time he spoke with him he would explain to him the truth in painting. Unfortunately, Cezanne died before he was able to convey that truth. Still, the notion that there is a truth in art is a question that has plagued many philosophers and sages much wiser than I. But back to the question, is Art subjective or objective? I believe that what is subjective is the knowledge of the critic or observer. I believe as Cezanne did, that the work, if done sincerely has an objective integrity and truth. It is the viewer that is often flawed by his own limited perception and belief systems. Another thought often misquoted is “a little knowledge is a dangerous thing”, if it were really “knowledge” it wouldn’t be dangerous. What often takes the place of real knowledge is belief, and as Plato pointed out, our beliefs are not always justified, but built on prejudices and misinformation. The reason the value and merit of art seems subjective, is that there is so much to learn to understand and appreciate about art and we are all limited beings who are destined to only glimpse a part of it. Through constant study, observation, and the willingness to remain open to the truth as it presents itself, I believe we can attain certain objectivity to the truth in art. We have to be willing to let go of the preconceptions and definitions we build along the way when new possibly conflicting truths are revealed. We must be satisfied by knowing we can never know the whole truth, because art refuses to be defined and limited, but that is exactly what makes it so powerful.
Posted by Mary Moquin at 7:06 AM No comments: