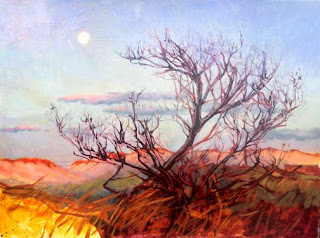 It has been a week since I returned from an art workshop held at Kripalu in Western MA. and the experience is still sinking in. This workshop was unlike any “art” workshop I have ever attended and has had a powerful impact on my art and thinking. There was no talk on technique, there were no “how to” lessons, for that would be “second hand” information, and Peter London, the workshop leader wrote the book “No More Second Hand Art”. The workshop centered on connecting to the larger experience of being in the natural world. We as artists attempt in our most sincere efforts to channel this experience and he hoped to facilitate us on our journey. One of the most difficult ideas in this workshop was allowing the work to “be” without aesthetic judgment. This is the topic I would like to further explore in this blog post.

At the workshop, we were asked, that when speaking with others about their work, to “just listen to each other without judgment and with great patience. Don’t listen to try to understand. It is an open place for them to continue their struggle.” We were just to be present to each other as they strove to create something new, to honor their struggle. The crux of the workshop was about seeing and responding to something in nature as if for the first time and to resist the temptation to just recapitulate some previous idea of what art is supposed to look like. We were not to create replica’s of the thing in order to display our technical proficiency, but respond and create something new that had an “is” of it’s own and pointed to nothing outside of itself. Peter warned that the danger of giving even well intended critical aesthetic input is that the new thing will retreat to be replaced by old “respected” methods. We were begged to “stop judging, because what you hear or see may not be all there is – you are only getting the surface.” I witnessed this phenomenon over and over again. There were many people in this group that were not what one would consider traditionally skilled at the craft of art-making, many had had little formal training. Yet they made their marks with honesty and when they experienced the world truthfully and set aside their fears of technical inadequacy they produced work as meaningful as the most skilled among us. To judge the work merely on its visual accuracy would have been to miss the point. But I think the most important line in this direction was when Peter said, “the thing will notice it is being judged and it will disappear and you will become your old self.” Aha. The critic I need to avoid is really the one always with me – me! That revelation only came to me yesterday. If I want to birth new marks and expressions into being, I have to prepare an accepting reception. I have to stop judging it and just trust that through the process, if I make each mark in a heartfelt and meaningful way – something “other” will come into being; something that isn’t only a description of the external, but the internal and potentially a reflection of the eternal. Another favorite line was “Sometimes you come so close to your heart, you touch all hearts.” Isn’t that what I want to do as an artist? In order to do this, I need to remain open and vulnerable to the creative process. Stop judging or fearing the judgment of others lest I scare the potential away and retreat to the safety of my tried and true methods. I have glimpsed an opportunity for real discovery now I am hoping I can retain my trust in the process, thank you Peter.
Posted by Mary Moquin at 2:23 PM 3 comments: