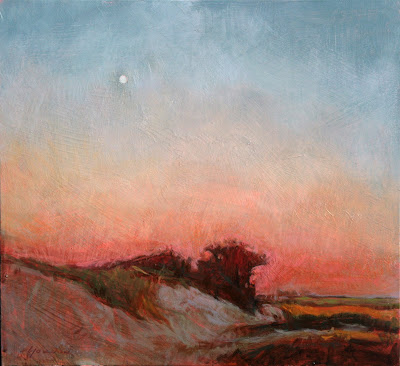 I recently gave a talk on Modernism at a local art association. This was a presentation that I prepared during graduate school and came from my struggle to figure out where I fit in to the mix of isms. I see my work as relatively representational, and at times I felt I was not "progressive" enough to fit into the contemporary art world. Sometimes my work was seen as "Nostalgic" and I soon learned that was a dirty word in the art world that quickly slid into the realm of sentimental, trite and at the worse, cliche. So, in order to better understand how representational art had gotten such a bad rap, I had to delve into the history books.

It was fascinating, and I realize that there is no easy answer to any of it. Basically, to long for the past and to create paintings that rekindle that longing is anti progressive. We have for some reason intrinsically locked art to science with the misbelief that one innovation supplants a previous discovery. Science revolts with new discoveries that discredits old facts, and art has been pulled into that same realm. Each new ism thinks they have the new definitive and all previous movements are old and decadent. Isn't this the way of so many things? Newer is better. We all want the coolest most innovative new car, but there will always be those that yearn for the classic or antique automobile. We want to be progressive, yet sometimes we long for a time when things were simpler. One is not better than the other, and yearning for something from the past doesn't have to be a weakness. But, during the 1850's being progressive and embracing technology was the only way to be, and anyone who refused to progress was seen to have inferior intellect. Now, doesn't this sound familiar? If you don't like abstract art, the natural assumption (by those that "know') is you just don't get it. And sometimes, I'll be the first to admit, this is absolutely true. But it isn't always the case!

So, what brings this to this blog today was a recent video I watched put together by Scott Burdick on "Beauty" (www.youtube.com/watch?v=qGX0_0VL06U" ). There are many well known realist artist today that feel slighted by the unfair attention that modern art seems to get at the expense of realism. The museums in turn influence the collectors. I touched on this phenomenon in my talk, according to "modern thought" realism belongs in the past and the job of art is to reflect the society and culture we live in today. I am not saying I agree with this statement, but I can't deny that there may be some validity in it. However, I don't think it was right when the modern movement slammed realism, and conversely it isn't right for realism to slam modernism because denigrating one form to raise another isn't right period.

I have made a vow not to condemn what I don't understand just because I don't understand it. This can be extremely difficult when one is looking at some abstract art. Sometimes someone can explain the value of a painting to me that I don't initally respond to and my eyes are opened and see it in a new way or sometimes I still don't get it. But I now hold my tongue from immediately saying "bull---t"! If it provokes discussion and provides meaning in some way to someone, terrific. If I don't get it, or if I need to read a text to get it, so what? If it makes be ponder an issue in a new way, then perhaps that is more important or at least as valid as me passively beholding a realistic work of art as beautiful. Is the piece less valid because someone has taken the time to think about it and shares his commentary with me? Is it only art if I get it immediately in the way I would get a painting that is more traditionally beautiful? Is beautiful the only criteria for good or bad work? Lets not limit art in any way shape or form, there is room for it all!

Long live beauty, nostalgia and sentiment in representational art, because sometimes we need to be reminded of the past. Long live expression and angst and passion in abstraction, because sometimes we need to be shaken and re-evaluate where we are going. Sometimes a symbol, no matter how crudely painted, draws attention to something in a way that a technically masterful realistic painting doesn't and visa versa. One is not better than the other, just different, they serve different purposes and functions in the world. Do not close yourself off to either type of art or all the others in between. For to do so, would be to limit your experience of the amazing diversity there is.

Picasso was as academically skilled as any of the realists portrayed in the video by Scott, yet Picasso found traditional painting vocabulary limited him and found war and death too horrid to portray with beautiful strokes of paint. So he had to create his own vocabulary and a new world of expression through abstraction was opened. Why can't we just accept the fact, "different strokes for different folks?" and that different times sometime require different modes of expression. I agree, abstract art is not as easily accessible as realism, but art isn't always about the instant gratification gained through recognition of the subject matter. Sometimes art requires active contemplation and sometimes the only meaning to be garnered is our own reaction. That doesn't make one better or worse. This is as crazy an argument, and as big a waste of breath as tying to define who God is or why he does or does not exist. Perhaps something different to everyone and to say my way is better that your way is just a waste of everyones time. Enough of the hierarchy's!
Posted by Mary Moquin at 7:37 AM No comments: